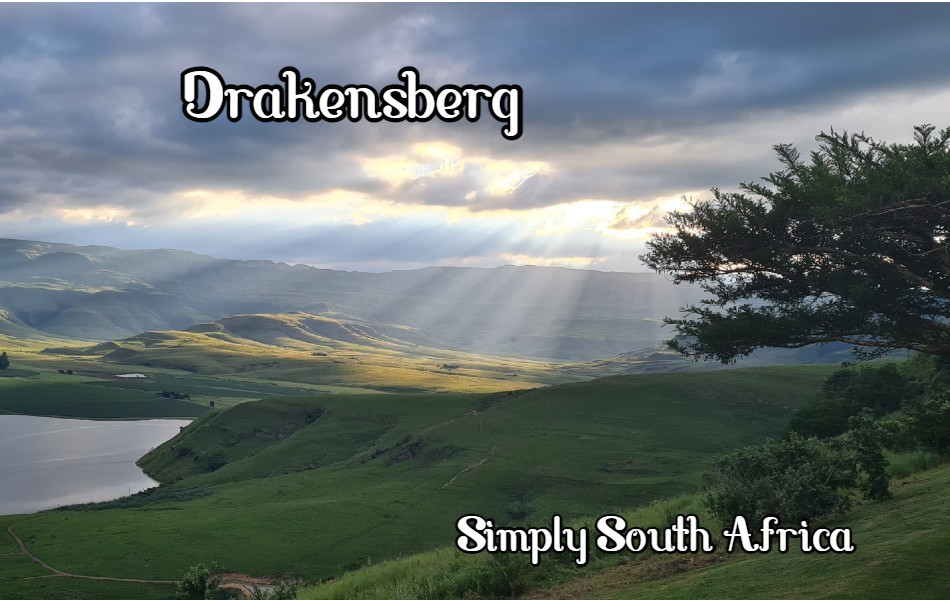 Roughly translated, the Drakensberg means “dragon mountains” or “mountains of the dragon”.  The mountain range stretches more than a 1000 km from the Eastern Cape Province in the South through Kwa-Zulu Natal, Lesotho, the Free State , through Mpumalanga Province and ends up North through Limpopo where it is known as” klein Drakensberge”.

Some of the peaks are mammoth in size and is on average 2900 meters high.  The highest peak is Thabana Ntlenyana and reaches 3482 meters above sea level.  The mountain is a dynamic wonderland and home to river valleys, foothills, stunning waterfalls, rock pools, mountain streams as well as caves.  These majestic Drakensberg is over 180 million years old.

The Drakensberg is the eastern portion of the Great Escarpment which encloses the central Southern African plateau.  It is within the borders of South Africa as well as Lesotho.  In the summer it is very warm and many travellers will visit this region during December to February.  During the winter the mountains are dusted with snow and is transformed into a winter wonderland.

Within the Drakensberg of Kwa-Zulu Natal lies the 243 000 hectare mountain region that is a world heritage site.  It is known as Ukhahlamba-Drakensberg Park that has around 300 San rock art sites with over 35 000 paintings in caves all around the park depicting humans, animals and complex spiritual life of the San stretching over a period of 4000 years.  It is also home to a huge diversity of plans and animal species.

The very high treeless peaks of the Drakensberg are the furthest South in Africa and farther away from the equator.  Therefor this provides cooler habitats and lower elevations than most mountain ranges in Africa.  High rainfall generates mountain streams and rivers.  These rivers include the mighty Orange River as well as the Tugela River.

The mountains are very rich in plant life and includes 119 species listed as globally endangered.  There are more than 2000 plant species and 98 of them are endemic.   The flora of the high grasslands is mainly creeping plants as well small shrubs.  Included in this is the rare Spiral Aloe which has a spiral shape.  In the meantime, the lower slopes are home to conifers (Podocarpus) which are rare in Africa.  It contains a great number of endemic plants and grasses found here includes oat and caterpillar grass to name just two.  In the highest part of the mountains the flora depends on the slope and varies depending on the hardness of the rock clasts.

The Drakensberg area is home to 299 recorded bird species.  This makes up 37% of all non-marine avian species in southern Africa.  This is a wonderful place to visit for all bird lovers, you will probably not even have enough time to see even half of them on a visit.  You will also find 24 species of snakes of which two are highly venomous.  So be careful when you go for walks!

There is one bird that is endemic to the high peaks, the mountain pipit, and another six species are also found mainly in this area.  Th endangered Cape vulture and lesser kestrel are two birds of pry that hunt in the mountains.  There are also mammals found here including the klipspringer, eland and mountain reedbuck.  These are all types of antelope.  You will also be able to see three endemic species of frogs in the mountain streams.  Fish are also found in many rivers and streams including the Maluti redfin.

The lower slopes of the Drakensberg support a lot of wildlife.  Perhaps the most important of these are the rare southern white rhinoceros as well as the black wildebeest.  It is also home to large herds of grazing flowers and antelopes.  Endemic species include a large number of chameleons as well as other reptiles.

This is a wonderful are to visit, something you must see.  The view is absolutely breath taking and you will not be disappointed in the beauty of the snow on the mountain tops or the wonderful grass cover in the summer.  Go and visit, you will love it.

My books on Amazon