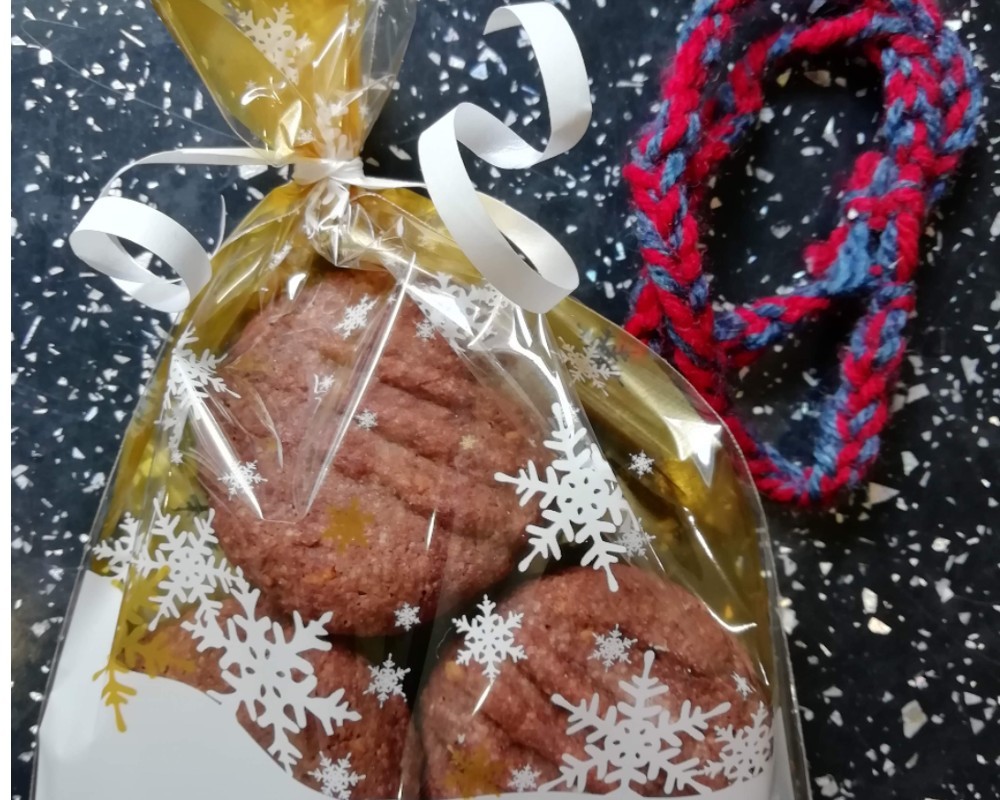 As you already know, we are selling our home made cookies through eBay… If you want to order directly from us, just send us a message. You can pay via PayPal or Direct transfer. All cookies will be baked to order and dispatched within 2 working days. Orders will be send via courier in the UK at a cost of R3.

We have just added our newest line. This is ideal for parties at home or school. It includes our lovely home made Romany Creams and you will also get a finger knitted bracelet for every bag. Your order will include 4 x individual bags with 3 cookies each as well as 4 x finger knitted bracelets (2 colours of your choice). The cost of this will be £9.20. If you would like to buy 2 or more (8 bags and 8 bracelets) you will get your order for £9 each instead of £9.20. 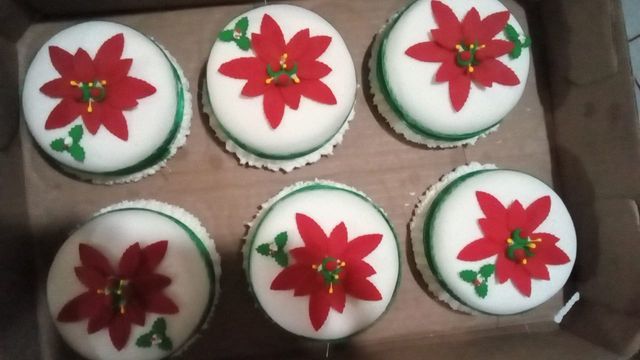 Christmas time… Feels like it comes around so quickly every year. Kids are so excited, we all are taking things slowly. And here we are another year later. We have family over from South Africa and it is VERY cold and wet at the moment, but why not bake and enjoy!!!

Enjoy your Christmas everyone !!!! Will post a recipe again soon. 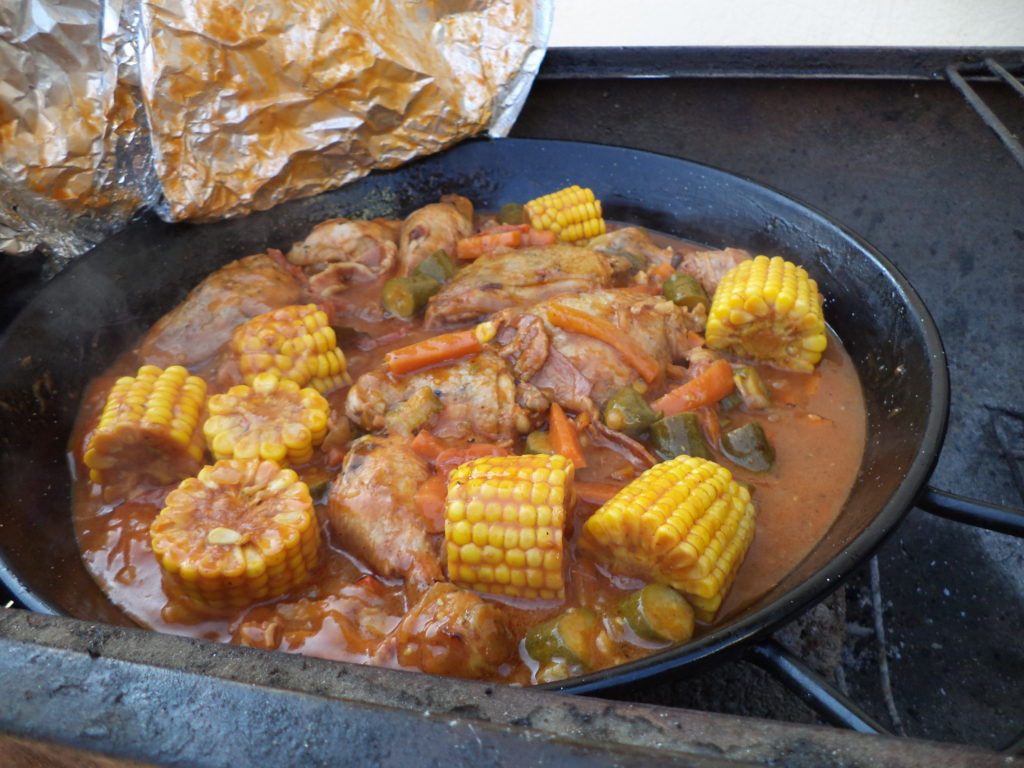 Who needs electric to cook with if you have charcoal and a braai? Our most favourite past time… When we were told we would not have electric the other day between 8 in the morning and 5 in the afternoon, my husband decided it is time to braai chicken over the coals. The smell while it was cooking was wonderful. Chicken, stir fry style veggies, mielies (corn on the cob) and a wonderful sauce with the most beautiful fresh herbs….. It was a wonderful dinner, completed just before the electric went back on…

South Africans live from season to season, eating what the earth gives them. A variation in latitude and height above sea level as well as the effect of ocean currents causes a great variety of climatic conditions throughout the country. There are three main rainfall-regions, divided into a winter rainfall in the south western part of the country including the Western Cape, rain all year round along the southern coastal belt and a summer rainfall in the rest of the country.

Rainfall varies between around 125 mm per year along the arid western coast and 1 000 mm a year on the eastern coast. Rainfall is irregular with less than 10% of the country receiving around 750 mm of rain per year. The other 90% receive less than this. The summers in South Africa are very hot with mostly cloudless days, but in the winter, only a few areas are frost-free.

If you travel to South Africa during October to May (mainly) you can go to farms and pick your own fruit. Make sure you check what times they are open so you won’t be disappointed. During November you can watch out for Strawberries. December is the correct month for strawberries, raspberries, loganberries, boysenberries, cherries and peaches. In January you can pick black currents, apricots, cherries, raspberries and strawberries. February is the month for raspberries, strawberries, apricots, nectarines, peaches and apples.

So when can you expect to buy certain fruits? Don’t be caught out, just take a look at which fruit is in season during the year. Nectarines and plums can be bought from November through to April, while you can enjoy Apricots and Litchis between November and February. Other fruits you can enjoy during the summer months include peaches from October to February, grapes during the months of December to May, melons between January and March and mangoes from December to April.

If you travel to South Africa during the colder months, you can sink your teeth into apples from March to September, oranges during the winter and spring months of April to November and grapefruit between April and September. If you are looking for something more sour, lemons is just the thing for you to get during the months of March to November. Easy peelers are available between April and September and my favourite, avocados, can be enjoyed from March to October of each year.

Guavas can be bought in May while prickly pears are available during January and February. Pears you find most of the year, with the season running from January to October, while pineapples grow in South Africa all year round. If you love cherries, make sure you keep your eyes open. If you close it for too long, you will miss it! Cherry season is a short 6 weeks, between the months of December and the beginning of January.

You can find pretty much most vegetables throughout the year. These include baby marrow, butternut squash, various types of pumpkin, green beans, various other beans, carrots, beetroot, broccoli, cauliflower, cassava, cabbage, cucumber, mushrooms, onions, potatoes, sweet potatoes, peas, spinach, sweet peppers, tomatoes, lettuce, mealies (white mealies and sweet corn, which is yellow) and many more. Potatoes are grown all over the country, so when one part has a winter rainfall and the other a summer rainfall, they transport the produce to the necessary area.

Mealies are planted during November and harvested during the month of March. As this finishes, the sunflowers and wheat are planted.

Make sure you know which fruits are in season so you know what to look forward to when you travel. All fruit and vegetables are filled with fiber, vitamins and minerals, so make sure you eat lots and lots of it. Enjoy!

South Africa has a very diverse rainfall, allowing many fruits, vegetables and crops to grow throughout the country, all year round. Crops are just one of South Africa’s most important production of food, not only to South Africans, but also the rest of Africa. Of South Africa’s total cultivated area (approximately 10 million hectors), around 36% is planted with maize and 21% has small grains. Oil seeds, sorghum, maize and small grains covers around two thirds of the total arable land.

The most important grain crop for South Africa and the rest of Africa is maize. Maize is a dietary staple for humans, a source of livestock feed and is also used in the production of other foods. Maize is the largest locally produced field crop and is a great source of carbohydrates to both humans and animals. South Africans produce around 8 million metric tons of mealies per year (depending on the rainfall), consumes around 7.5 million metric tons and exports the surplus to countries like Lesotho and Swaziland. More than 600 million metric tons of maize is produced per year world-wide (varies every year).

Maelies are cold-intolerant and therefor need to be planted during the spring season. Its root system is generally shallow, so the plant depends on soil moisture. Maelies are planted during the month of November in South Africa and harvested around March. Because maize is most sensitive to drought, you never know how the crop will do until you see how much it rains. The rains in the summer rainfall area only start around December, so it is difficult to predict if it will rain. Maize is planted before this time, so you have to hope and pray it rains. More than 50% of water in South Africa is used for agricultural purposes.

Grain is the second most important crop and produced in the winter rainfall areas of Western Cape and summer rainfall areas of the North West, Northern Province and the Free State. Free State is currently the highest producer of grain but there are annual fluctuations. Western Cape is the most stable production area due to the more dependable rainfall. It is usually grown during the frost-free season.

Sorghum is another very important grain for South Africa and is cultivated in the drier parts of the summer rainfall areas of Free State as well as in the North-West with yields often exceeding 200 000 tons. Sorghum is slender with leafy stems and grows up to 3 meters high on a variety of soils in areas with around 600 mm of rain per year. It is drought and heat tolerant and cultivated primarily for hay. An average temperature of around 25°C produces maximum grain yields in a given year.

Sorghum is native to Southern Africa and has been used since prehistoric times for food as well as brewing purposes. This is also used in packaging materials for sensitive equipment and is made into excellent wall boards for house building.

Lucerne seed is also very important and is mainly produced in Oudtshoorn, De Rust and Douglas. Oudtshoorn alone is responsible for around 90% of the lucerne seed produced in South Africa today. Around 100 to 120 lucerne bales per hectare can be produced every three weeks, as long as enough water is available. Make sure lucerne is planted during the rainfall season.South Africa produces a large variety of crops, fruit and vegetables and is able to provide in their people’s needs, with enough remaining to export high quality produce to the international market.